How Smart Are Your Contracts?

The concept of Smart Contracts has been given an increasing amount of attention in 2018. Many lawyers that do not have experience with this new technology have questions about what all this means to them and their clients. Just what is a Smart Contract anyway? And are conventional contracts "dumb"? The following is one of the more helpful definitions of Smart Contracts that I have encountered:

Smart contracts are self-executing contracts with the terms of the agreement between buyer and seller being directly written into lines of code. The code and the agreements contained therein exist across a distributed, decentralized blockchain network. Smart contracts permit trusted transactions and agreements to be carried out among disparate, anonymous parties without the need for a central authority, legal system, or external enforcement mechanism. They render transactions traceable, transparent, and irreversible.

It should be recognized that the concept of Smart Contracts is not entirely new. Many point to a seminal paper written in 1994 by pioneering computer scientist Nick Szabo that laid the basic outlines of Smart Contracts. Many of the predicted use cases for Smart Contracts advanced by Nick Szabo have come to pass. It simply took further advances in software technology to implement them. For instance, in the financial industry the sale and purchase of derivatives with complex terms are now by and large executed using sophisticated software protocols that embody the terms and conditions without manual human intervention.

What does all of this mean for law firms? Do lawyers need to learn how to write code in order to continue to practice law? Hardly. But it does suggest that smart lawyers will see the hand writing on the wall and embrace Smart Contract technology. Regardless of your educational background, if you aren't familiar with terms in common use such as blockchain, hash code, hexadecimal, or digital signature, perhaps it is time to enhance your skill set to prepare for the future.

In general, the current state of the law seems to still requires a conventional contract to be enforceable, with the terms and conditions set out in text either in paper, or in soft copy; with an electronic signature (e.g so called click through; licenses for software such as apps). The current development of the Smart Contract technology is to then to develop code that implements certain terms and conditions of the contract. For instance, most Smart Contracts today are written in a computer language called Solidity (similar to Java) and implemented on the Ethereum blockchain.

To give you a better idea of what a code implemented Smart Contract looks like, the following is a snippet of code for a routine called JSON written in Solidity for describing a particular individual (source: Wikipedia): 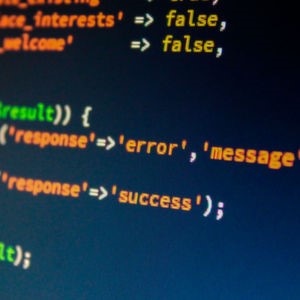 Stated another way, Smart Contracts use self-executing software code to actuate the terms of the contract when certain defined inputs are received. Some Smart Contract codes are even autonomous and will proactively search the web to locate the inputs (e.g crop insurance that will pay out to the insured based on the code detecting a defined low environmental temperature in a particular geographic location).

Implementing the Smart Contract in a blockchain environment provides legally enforceable agreements to be implemented in a timely, secure, reliable and cost effective manner. It also allows the use of Digital Signatures that uniquely identify a party to the contract and prevent unauthorized execution by a third party (unlike electronic signatures). These innate advantages will continue to fuel the increasing migration to blockchain based Smart Contracts in many legal applications.

One interesting question that all of this poses for lawyers is: when will the state of the law advance far enough to allow for an enforceable contract to be written entirely in code (rather than text) and digitally signed by the parties?

If you are looking for assistance in understanding these profound changes to the practice of law, Singapore based LegalFAB Private Limited will be glad to assist you in making the transition to Smart Contract technology. LegalFAB will be releasing its industry leading blockchain based Smart Contract assembly and management solution for the legal industry. That also includes its proprietary, award winning, digital signature product. Contact us for an in depth discussion of how we can help you develop your own Smart Contracts for your clients. Be part of the Smart Contract revolution.